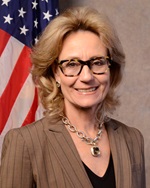 Secretary of the Government Operations Agency

Marybel Batjer is Secretary of the California Government Operations Agency (CalGovOps). She was appointed to the post by Governor Edmund G. Brown, Jr. in June 2013 to serve as the first-ever Secretary of CalGovOps. The agency was established as part of Brown’s comprehensive overhaul of state government and is responsible for administering state operations including procurement, real estate, information technology, and human resources.

Prior to her appointment, Batjer served as vice president of public policy and corporate social responsibility for Caesars Entertainment, Inc., the world’s largest gaming-entertainment company. In this role, she developed and promoted corporate social responsibility (CSR) policy and initiatives for the company and counseled its senior executive team on issues pertaining to reputation-management, public policy and government relations.
Before joining Caesars in January 2005, Batjer held senior leadership posts in the executive branches of two state governments, as well as key advisory roles in two U.S. presidential administrations and at the Pentagon.
From 2003 to 2005, she was Cabinet Secretary to the Governor of the State of California, where she served as chief policy advisor to Gov. Arnold Schwarzenegger and directed the activities of the governor’s 13 cabinet secretaries. Earlier, Batjer was Chief of Staff to Gov. Kenny Guinn of Nevada. She has also served as Undersecretary of the California Business, Transportation and Housing Agency and as Chief Deputy Director of the California Department of Fair Employment and Housing.

In addition, Batjer was Director of Political Planning for the National Women’s Political Caucus. She is the former Vice-Chair of the State of Nevada’s Colorado River Commission, the Past Chair of the National Judicial College Board of Trustees, member of the Nevada Museum of Art Board of Directors, Board of Directors Desert Research Institute Foundation, and Board Member of the Nevada Woman’s Fund.
Batjer received her bachelor’s degree from Mills College in California and studied international public policy at the graduate level at Johns Hopkins University. She also studied national and international security at Harvard University’s John F. Kennedy School of Government. She currently resides in Sacramento.